Yes I’m officially quitting twitter, or at least taking a lengthy sabbatical.  For at least the next three months I’ve made the decision to put the EBA (and my own personal twitter account) into winter hibernation as an experiment. Curious about why? Then read on.

You might be thinking that surely Twitter doesn’t take that much time? Why not schedule several weeks worth of content in advance? Why not use tools like Sendible or Meet Edgar that will recycle your evergreen tweets for you? All things I considered but it comes to down to some simple maths.

There are only 24 hours in each day. Even if we only dedicate 15 minutes daily for a quick check in, reply to a few tweets and add some new content into the Twitter scheduling software we use and do that for 4 out of the 7 days a week, that’s still 52 hours a year spent on twitter and doing a half arsed job at that! I think we can produce more valuable content and better marketing in that 52 hours.

Personally, it’s not a channel I’ve enjoyed interacting on for a while – I’ve been using twitter for over a decade now via my personal account, perhaps I’ve just got bored of it. If so, I don’t think I’m the only one, with less interaction and lively equine related chat on the platform. And yes I’m aware this is a self-fulfilling prophecy, because the less time you spend engaging on a social platform, the less reward you get back.

However, I didn’t make the decision merely on personal whim & I could have delegated Twitter entirely to one of my team. But again there is a monetary value to doing that, both in paying them for the time spent and also the other opportunities they aren’t working on in that 52 hours a year.

Being a geek, I ran the numbers to help me make this decision. The first place I started was Twitter Analytics which showed some nice big numbers for tweet impressions, profile visits etc. Then I flipped over to Google Analytics and things looked a lot less impressive.

Less than 1% of the traffic to our website over the last 3 months came from Twitter (despite getting a lot of tweet impressions during this period). More importantly though, those visitors aren’t translating into new members – I can track this via my CRM system which shows the original traffic source of all contacts.

So it became clear that Twitter isn’t working to generate traffic and more importantly members and combined with the fact that I don’t personally enjoy using it at the moment, the sabbatical became an easy decision to make.

I want to highlight though that this isn’t me saying Twitter is dead as a social platform or we’ll never go back on it, right at the beginning of this post I said this was a bit of an experiment! Instead it’s all about freeing up some time and headspace to work on other things, which I believe will deliver more value and grow our membership more effectively.

Although the numbers made this a very logical decision, there were a couple of things that went through my head before I made the final choice.

Firstly, does the EBA have to be on every platform we deliver training on? If I tell clients to do something via my own business (a digital agency), do I have to be doing it too for my own projects or risk looking like a hypocrite? And will we miss out on opportunities? Especially from journalists, where Twitter is undoubtedly a great place to initiate contact, respond to #journorequests etc.

To answer the first, I stepped back & looked at the EBA as if it were a client and I would absolutely say to focus on what works the best for you and only branch out when you’ve tapped out the potential of existing resources or there is additional capacity (more staff, interns etc.). However, even if I had another 2 team members delivered by Santa under the Christmas tree, I still wouldn’t put them to work on Twitter. So right now, it’s not the right place for this particular business.

Does that mean we won’t offer training on Twitter in the future? Absolutely not, because for some businesses, it’s a great channel and you absolutely should be on it.

Is this hypocritical? I would say absolutely not, it’s 15 years of hard worn experience that led to this decision & finally the dawning realisation that to go from good to great you have to do less, not more.

For engaging with journalists, I’m going to try something really radical and pick up the phone and speak to them…again a decision that I’d prefer deeper relationships with a handful instead of 50 on a Twitter list that I fire emojis & retweets at.

So it’s adios to twitter as we welcome in a new year! I’d love to know if you’re planning on being more or less active on social media in the coming months? Let me know via the comments box below or share your thoughts in our Facebook group.

If you’ve been inspired to think about doing less in 2019, then our first masterclass of the year will be ideal for you.

Now more than ever there is a need for Business Owners and Entrepreneurs to find a way to take back control of their time in this busy, distracting, and interruption-filled chaotic world we now live in, to find ways to free up time, be more productive and achieve more.

Andy Edwards from Timesmart will be teaching us how to Plan To Do Less & Achieve A Lot More on 3rd January at 7.30pm (GMT). Click here for more info and to register. 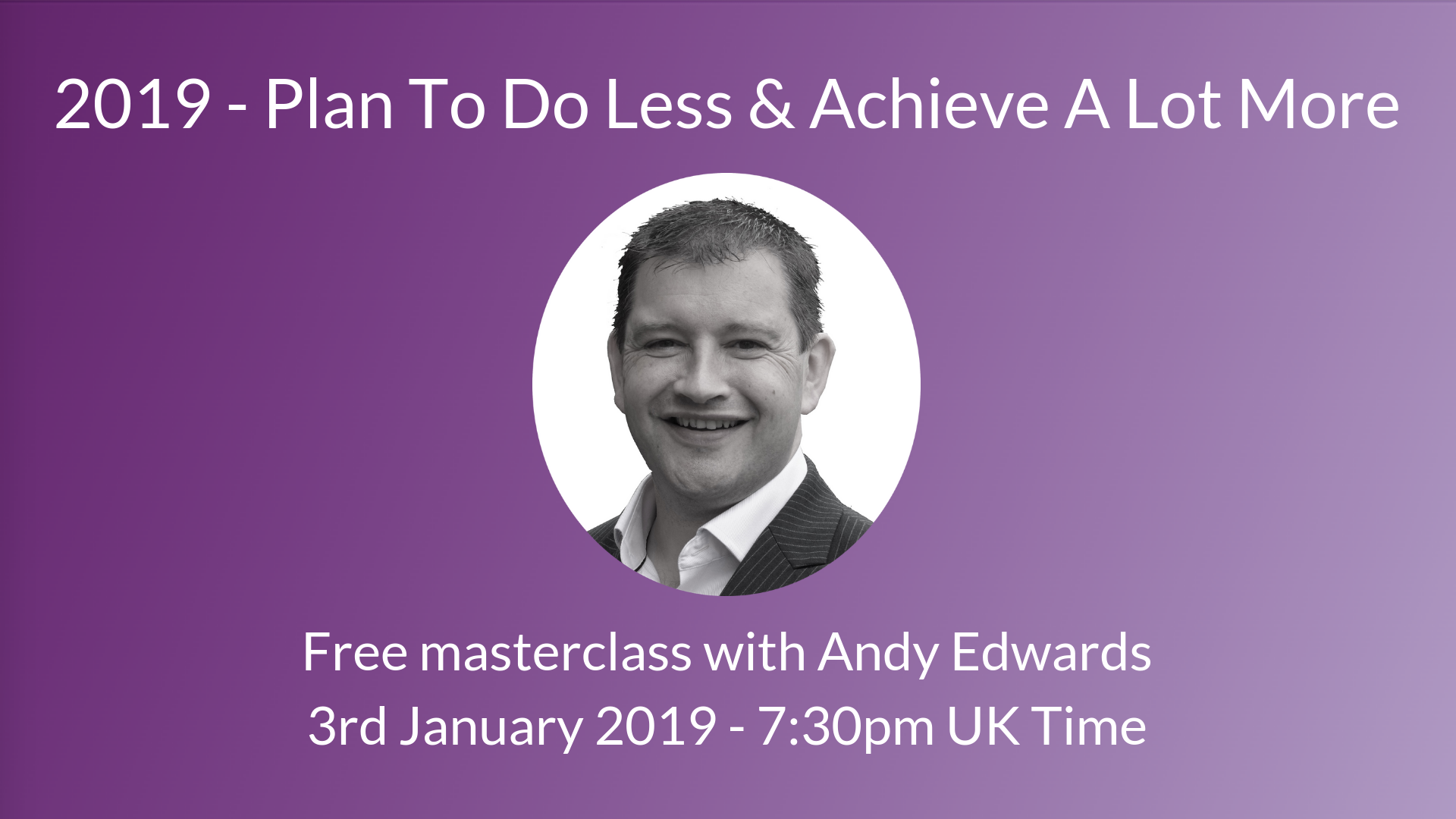